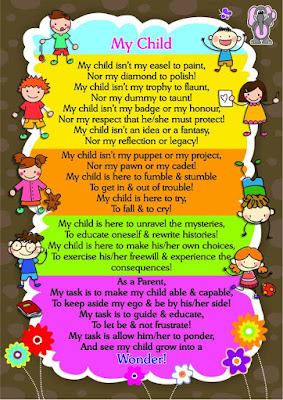 ·         A video of a newborn baby walking went viral on social media.. (infancy)
·         News of a young teenager killing his mother and feeling no remorse, shook the city…(adolescence)
·         And yet another news went unnoticed, that of 4 young children running away from home because…. their parents did not allow them to play! (Young child)

What is common in all of the above? It’s the knowledge of the science of parenting. Mothers, still carry the entire parenting role on their shoulders, and today’s mother is quite fed up with people advising her or telling her she is wrong or has made a mistake. Understandable. Previously it would be only the mother in law or mother who would advice a mother about parenting but today it is the nosy neighbor, Google aunty, whatsapp friends, Facebook friends and of course still the mother and mother in law! But instead of shutting out everyone and listening to no one I would advice today’s yummy mummy to go for smart parenting and understand the science of parenting so that they can listen to reason and not rumours, myths and plain ridiculous ideas!

So lets understand the science behind each of the above news. Newborn baby walking? Possible. All babies can! It is called the step reflex. Present in every baby but we don’t notice it because which idiot would want to make a newborn stand?! Why did the video go viral? Because the science of parenting is not used by 98% parents and so most mothers after seeing the video went….’is something wrong with my baby? What did that mother eat during pregnancy?’
These are some reflexes present in all new borns-
1.     Startle, or Moro, reflex. When startled by a sudden or loud noise, or a feeling of falling, the Moro reflex will cause the baby to extend the legs, arms, and fingers, arch the back, draw the head back, then draw the arms back, fists clenched, into the chest. Duration: Four to six months.
2.     Babinski's, or plantar, reflex. When the sole of a baby's foot is gently stroked from the heel to toe, the baby's toes flare upward and the foot turns in. Duration: Between six months and two years, after which toes curl downward.
3.     Rooting reflex. A newborn whose cheek is gently stroked will turn in the direction of the stimulus, mouth open and ready to suckle. This reflex helps the baby locate the breast or bottle and secure a meal. Duration: About three to four months, though it may persist when baby is sleeping.
4.     Walking, or stepping, reflex. Held up­right on a table or other flat surface, sup­ported under the arms, a newborn may lift one leg and then the other, taking what seem to be "steps." This "practice walking" reflex works best after the fourth day of life. Duration: Variable, but typically about two months. (This reflex does not forecast early walking.)
5.     Sucking reflex. A newborn will reflexively suck when the roof of his or her mouth is touched, such as when a nipple is placed in the mouth. Duration: Present at birth and lasts until two to four months, when volun­tary sucking takes over.
6.     Palmar grasping reflex. Touch the palm of your baby's hand, and his or her 'fin­gers will curl around and cling to your finger (or any object). This reflex curls babies' feet and toes, too, when they're touched. Duration: Three to six months.
7.     Tonic neck, or fencing, reflex. Placed on the back, a young baby will assume a "fencing position," head to one side, with arms and legs on that side extended and the opposite limbs flexed. Duration: Varies a lot. It may be pre­sent at birth or may not appear for at least two months, and disappear at about four to six months—or sooner, or later.
You can watch a video about these reflexes or read more about it on www.born-smart.com

A young teenager brutally kills his own mother and writes a message that implied that he was fed up of her nagging and the message also said ‘catch me and hang me’. The child’s father is in the police force. What went wrong? The young boy scored more than 90% in his 10th standard but then his grades starting going down. He was put in an engineering college but did not attend. Mother was a recluse and was never seen by neighbours. She would keep an eye and spy on the phones of both the son and father. Father would grumble to everyone about how he has tried everything and works hard for the son but to no avail. The boy even tried to commit suicide but the mother caught him and reprimanded him for the same. What is the science of parenting here?

The mother was most likely a depression patient, which went unidentified and thus the need to be alone, doubting the husband and child. The young boy was affected by the home atmosphere too and was also most likely depressed and that is why the need to commit suicide. Instead of seeking therapy for the son, he was reprimanded which means when attachment, understanding and bonding was most required by the teenager he was shunned and reprimanded. It emotionally hardened the child. The burden of achievement, fulfilling parent’s aspirations, being ridiculed, all this resulted in a knee jerk angry reaction of stabbing and killing his mother.
It is important for parents to understand that children don’t drift away when they become teenagers, they start drifting from age 7 onwards and parents don’t notice as they are busy with academic goals and ensuring that the child achieves social recognition in sports, extra activities, marks, grades etc. it is important for parents to keep their attachment with their child and work towards keeping it strong. Attachment is not helicopter parenting. Taking a leaf from the work of John Bowlby, the father of the attachment theory, I would say attachment helps the parent child bond in 3 ways- proximity maintenance, gives a safe haven, a secure base.
1.     Proximity maintenance – you are always emotionally close to your child, you may not be physically present around your child, but your emotional bond is so strong that it helps your child feel emotionally wanted and cared for and not feel emotionally bereft.
2.     Safe haven- when a child is in trouble or emotionally upset the child knows that I can depend on my parents for support, this is a safe haven. The child knows that my parents are firm but in times of need they will first support and reprimand later.
3.     Secure base- this means, roots and wings, you allow the child to be independent, take decisions because of the strong secure base that you have given the child which was constant and consistent from childhood.
Instead of always shouting or lecturing him try ‘teen whispering’, which means having a quiet, discussion in which both the parent and the teen puts forward their point of view and way ahead.
“When flying between the Earth and the Moon, the Apollo spacecraft was off course more than 90 percent of the time. On their lunar voyages the crew would constantly bring the craft back to its intended trajectory. They were not on a perfect path but a critical path. Because they knew their intended target they could correct their spacecraft whenever it wandered off- Anon”
Teenagers are on a voyage to adulthood, they will veer off course like the Apollo but we need to know that as long as they come back to the intended trajectory which in their case is a healthy, happy life, we can be there to correct their spacecraft as and when required. No teenager will be perfect what is critical is that they are given a perfect chance.

The last bit of news was about 4 young children, aged 6,7, and 8 who ran away from home because their parents did not allow them to play! So what is the science of parenting here? Well, Play is the need of childhood, it is the work of childhood, and it helps kids develop logic, knowledge, patience, and so many other life skills. But because we don’t see marks of grades for play or a report card that says the child is playing 98% etc. we don’t give play the importance it deserves. Maybe it is time schools start giving a report card for play so that parents and teachers realize that play is the research that children do in the laboratory of life and toys are their apparatus.
Rudolf Steiner, the founder of anthroposophy and the Waldorf system of education stressed that our life is divided into three stages namely, Infancy,Childhood and Adolescence. He advised parents and teachers that it is important to base our interactions with children of each stage as per the requirements of each stage of growth. So change your parenting style as per your child’s age but never change the attachment bond that you have with your child, keep it strong forever.
Its time parents understand parenting and the science behind it before they decide to become parents. Because parenting is not just about pregnancy and childbirth, parenting is a responsibility for life. And I strongly feel that there should be a parenting course…a license to become a parent. You are bringing up a life and if you make a mistake you can ruin that life forever. Its time we took parenting seriously and I urge all parents to seek out parenting mentors, guides who can guide them on the right path. Seeking help from each other is not enough because each child is unique and has a unique set of genes that define his/her personality and so using someone’s else’s solution may be detrimental to your child.
Its time to get your parenting license.